I live in University City, MO, which has no crime. Don’t believe me? This map says so: 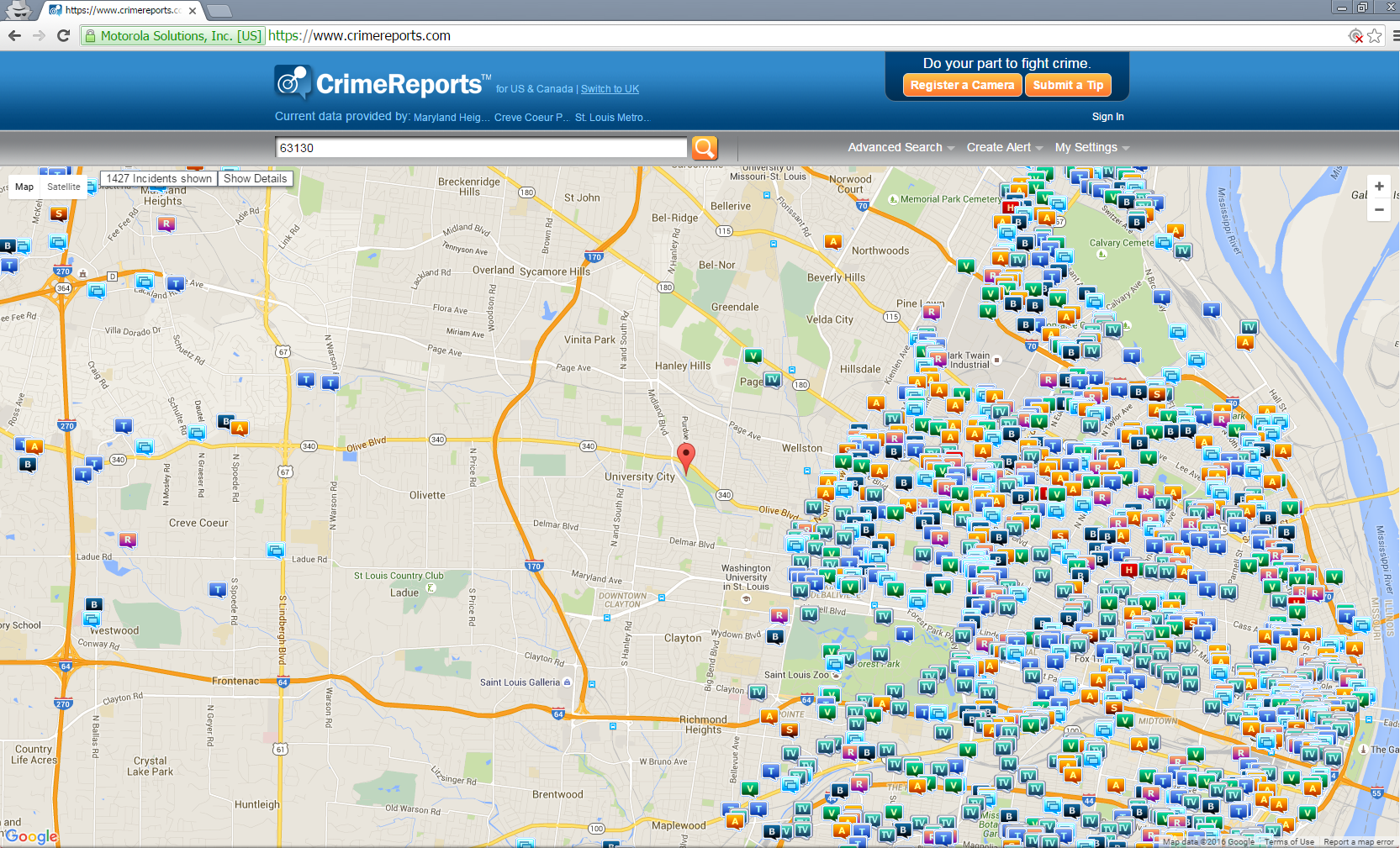 The benefits of open government data - crime data being just one aspect of that - is well documented. It allows you and I to take the data the process it, innovate on it, be informed based on it, and keep our government officials accountable.

It is easier now more than ever to have a basic open data program at any government level. Your government can use a product like ArcGIS Open Data or Socrata which are both fancy and have a lot of nice open government features. Or for cheaper, a government representative can create a free GitHub account and upload the data. Or even cheaper AND easier - simply post CSV files on an existing website. The key is that the data be machine readable and in an open format.

University City was not doing that - crime data, before a few months ago, was being released in non-machine-readable PDFs. Thus it’s not able to be placed on crime maps, or analyzed by experts, or any of that. And so we end up with the hole in the crime map over our town.

“Let’s fix this!” I said. Little did I know it’d be a years-long adventure.

I originally reached out to my city council representative, mentioning the benefits of open data and why our city should be doing more to provide open data.

I was just wondering if you know of any current or future plans of U City to open our city data? I recently wrote a post on open data - http://www.gavinr.com/2013/10/16/share-data-github/ - and would love to help U City in getting our public data more available in open formats.

I got a quick response saying my message was received, but after a few back-and-forth emails, nothing ever happened.

Go to the Top!

A couple years later, I emailed the police chief directly:

I am writing to inquire why the crime stats posted on http://www.ucitymo.org/index.aspx?nid=482 are posted in a hard-to-process PDF format, instead of a more open CSV (Excel) format. I think the city at large would benefit greatly from having that data more easily process-able. Is there any way your team could provide this?

Response from this: nothing. Crickets. I took this to mean neither my city council rep nor the police chief has any interest in helping me get this done.

In 2016, University City adopted “MyGov” as their website CMS. One portion of this solution allows citizens to make a request digitally to the city. One of those options is “Police Issues - Crime Statistics.” Interesting. So I fill out the form, using the same request as above and wait. No response.

WHEW. Finally after almost three years of discussing this, University City has made a small step toward open data. I learned through this process that when making requests to government officials, you sometimes have to be extremely specific, because general ideas or initiatives will probably get dropped. You also need to persevere - doing the right thing is not always the easiest thing (although it’s quite easy now - uploading an XLSX file? c’mon), so you’ll probably have to ask multiple times, and multiple ways, to get them to do what’s right.

The good news: my city is posting the data in a decent format. Bad news: it’s not the best layout of the data. In a later post I’ll show how I wrote some scripts to process that and get it into databases and maps.

Written by Gavin Rehkemper on February 27, 2017